Guess Who is Back on His Feet?

We went to our follow up appointment at Levine's Pediatric Orthopedic Surgery on Wednesday (Feb. 13th), and Talen got the green light to get back up on his feet and start walking. Of course he had to immediately give it a go, and he was shaky but demanded to walk out of the doctor's office.

Pics after the jump...

Ok, I'm attempting to attach the pics to this post in the ios blogger app. Am I doing this right? Oh my god. 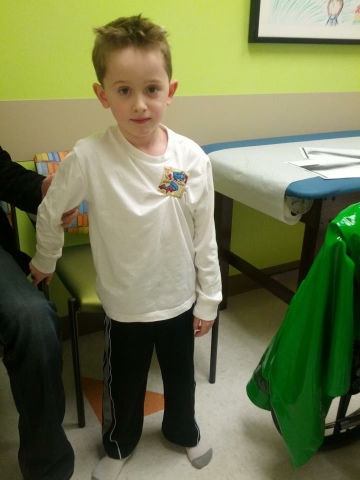 One small step for Toomee

He is struggling with walking for more than a short distance, and the stairs are more of an issue now than ever, but given the six weeks off of his feet and the degree to which the DMD accelerates the decline in muscle tissue during periods of inactivity, it seems almost miraculous that he is even standing.

He seems to want to keep his foot turned outward right now, which you can somewhat see in the picture above. Lisa is going to be scheduling visits with Scott at the MDA clinic to see about physical therapy. Hopefully the struggle to get fully mobile will just be a temporary thing. If I'm being honest, though, my biggest fear regarding this whole situation is that the fracture and subsequent period of time off his feet will trigger a rapid decline in mobility that he won't be able to recover from.

I tend to be pessimistic though. Talen only seems to be capable of looking on the bright side, so I'm trying my best to follow his lead. 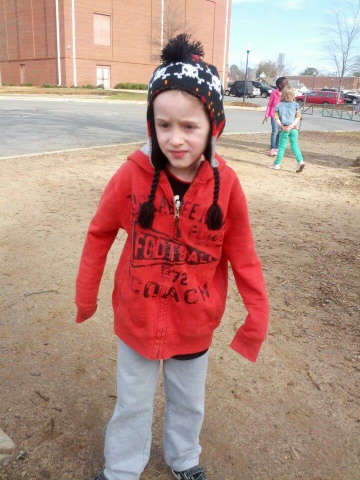 He's back in school now, and that's a whole other bag of worms. He has been working hard to get a handle on literacy skills, and before the break he was making pretty big improvements. It's hard to say how much this might set him back.

But worries and doubts aside, the main point is that he's back upright and out of the wheelchair. If there is a silver lining to be had, it came in the form of a discussion with the orthopedic surgeon.

I asked her about the nature of Talen's break. It seemed very abnormal to me, and she agreed that it was not typical. I asked a number of questions about the general lack of bone density in kids with DMD, because I had been told by one neurologist that DMD patients frequently suffer from osteopenia caused by the muscular systems inability to stimulate bone growth (similar to how a sunflower will generate a thicker stem when subjected to wind or some other outside interaction).

The orthopedic surgeon told us that with Talen's late diagnosis that he probably wasn't suffering from any sort of osteopenia, that it is typically seen in kids who are so severely affected that their diagnosis occurs very early.

We will be meeting with his pediatrician at some point to check vitamin d levels and other indicators that will verify, but this is promising news.
Posted by Unknown at 9:45 AM