All the King's Horses (PT I)

You reach this state of mind when you're looking at your son on the ground with his leg twisted back behind him at an unnatural angle that you can never fully enunciate. It's this perfect state of panic that threatens to overwhelm you, all while your forebrain is screaming at you to pull your shit together because someone is completely depending on you to take care of this.

I was hanging shelves in the upstairs closet when I heard "The Fall." One second Talen was running down the hall, then I heard a bang followed by crying, followed shortly after by Lisa screaming for me to come to the hall where I found the previously described scene.

The trip to the hospital was surreal. When you start to feel the panic rising in your throat you find that yelling at people can sometimes help push it back down, or I should say I sometimes do (and I think Lisa does also though she'll probably deny it). So we spent a lot of the trip from Matthews to Levine's Children's Hospital alternating between loud arguing and pestering Talen to make sure he wasn't going into shock. If you know Talen, you know that the only time he's ever really quiet is when he's sleeping, but he refused to respond to us in the van. The most we could get from him was an irritated gesture of finger to lips and a quick shushing...

The triage nurse was jabbing at a card with some smiley faces on it, asking about levels of pain. Talen was refusing to play ball and kept shushing the nurse. I let her give it her best shot before I told her, "Listen, he walked around for three days this summer with a broken arm and never gave us any idea he was in pain. Let's go ahead and call this a 10 so we can move along."

In the ER, we had a carousel of nurses and techs and doctors (oh my) come through to visit. There was quite a bit of frowning, some clucking of tongues, and more than a few pokes and prods as the medical staff began assembling their diagnosis. After a trip to the x-ray that left him breathless from crying, we got the news. 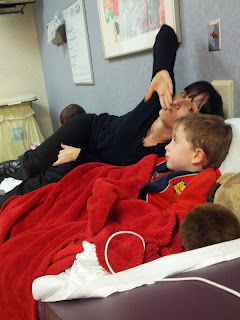 Talen went into meltdown-mode. Our friend had fallen at our house a year or so before and broken his femur (small world, right?), so Talen already knew what the implications were. Foremost among the concerns he voiced was a statement that keeps me awake at night still.

"Now I'm going to have to get a wheelchair, and I don't want to be in a wheelchair. Wheelchairs are for disabled people, and I'm not disabled."

It hit me right in that same place where it hurts when he tells me that he wants to be a fireman when he grows up or asks me what I think his wife will look like. What can you do in that situation? If you're a parent, you lie. I guess you have an obligation to say it's going to be ok even when you don't really believe it will be.

At this point I should explain for any non-parents, or any parents who haven't been to the ER, what happens when you take your child to the ER with any sort of laceration, broken bone, or contusion. You get THE QUESTION.

The first couple of times you get asked, it seems innocent. But then they start asking your child, and if you respond for him they look at you like there's something wrong. You might dismiss it the first couple of times, but then they start asking your spouse. If you have other children there, you'll get, "So how did your brother/sister get hurt?" At some point you realize that they're not really asking how your child got hurt, they're asking if you beat your child. Once you realize what is really being asked, the constant repetition becomes tiresome. In any other situation, if someone were to ask me something equally repugnant more than once I would assume that it was because they didn't believe my answer the first time.

For posterity's sake, if there are any healthcare professionals reading this blog, I would like for you to pass this message along: Your ham-fisted attempts to probe for domestic abuse are obvious and unappreciated. I've heard the justification, and it's bullshit. If you truly need to know if I got mad and broke my kid's femur, you can probably wait until the initial crisis is over. We're not going anywhere, are we?

I actually started to lose it at one point when we got the question for the tenth or twelfth time. I think I was saved by my obsessive compulsion to interrogate doctors for specific answers and do my own independent medical research during downtime. I had gleaned from the orthopedic doctors that Talen had a spiral fracture in the upper part of his femoral shaft, so I decided to look up spiral fractures to try and gauge how long he was going to be off his feet. This was the first article I came upon:

So I decided to keep my mouth shut, keep repeating my story, and maybe some day when everything was over I would be vindicated by hacking out some angry words on a little-viewed blog.

We were brought up to a room that night. While they were transferring him from the ER bed to the bed in the room, a tech showed up with a set of scales and waited patiently while Talen screamed bloody murder about being moved. Once we had him settled she started into the room. The nurse looked at her and shook her head. I sensed some mild degree of "Don't tell me how to do my job" starting to rear its head, so I weighed in.

"Are you planning on weighing him in this bed and subtracting the weight of an empty bed?"

"I am going to fart in your face, and then I'm going to tape your face to the wall," he told the nurse.

"How about if I fart in your face first?" She asked. I was glad she had a sense of humor. 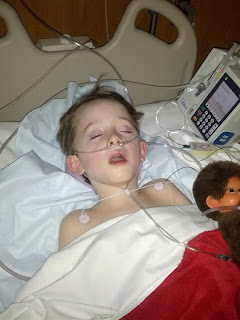 The next morning, the orthopedic surgeon came in and took Talen off to have his leg patched up. They set two nails in the bone to align the broken pieces, and told us that he would be off of his feet for 4-6 weeks. Seeing him laying in the recovery room was jarring. He looked so frail, not at all like the kid who is bouncing off our walls from the time he jumps out of bed until the time he passes out at night.


(Lisa's hovering, so I guess I've been on here long enough tonight. I'll wrap this up in another post)
Posted by Unknown at 6:54 PM